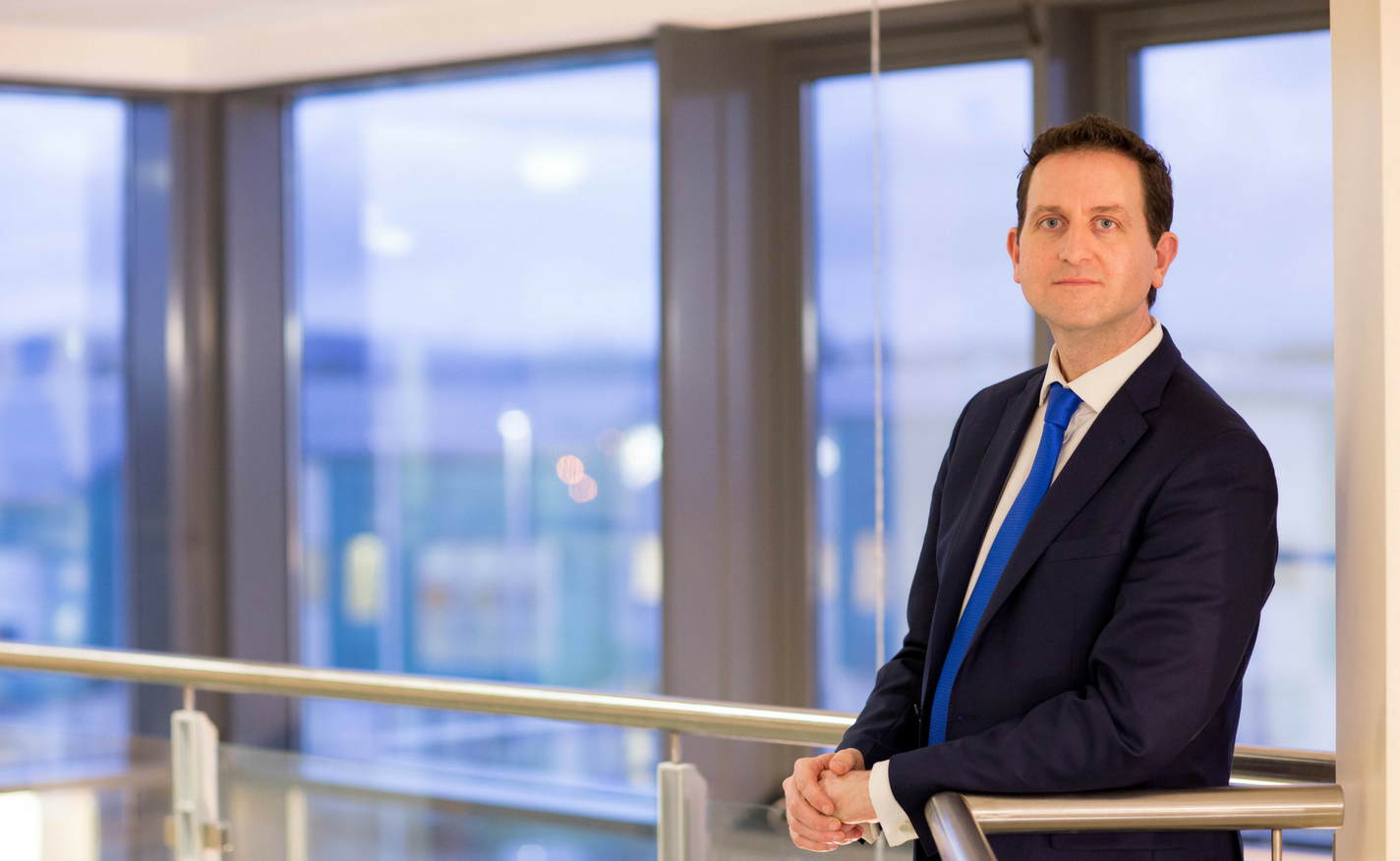 Businessman Terry Clune, founder of The Taxback Group, is exactly where he wants to be in life.

A farmer close to where multi-millionaire businessman Terry Clune grew up feeds his cattle beer and chocolate and soothes them with classical music.

Clune, founder of the rapidly-growing Taxback Group, uses the Wicklow farmer as an example as to why people should not lose perspective over Brexit. Unlike many Irish beef farmers, Clune’s neighbour has no concerns about the UK market. He sells his beef in Tokyo as highly sought-after Kobe beef, making 20 times per cow that he would in Ireland or England.

Clune too is happy. His own group of interlinked companies, worth an estimated €250m, are growing at 25pc to 35pc per annum with big new opportunities ahead, he says. But the beer-drinking cow story comes as close as any of his often colourful tales to explaining Clune’s own business philosophy.

Clune puts some of his success down to his background. His father, a Wicklow sheep farmer, died at just 48 so he grew up with lots of experience buying and selling animals.

“When you grow up in an entrepreneurial environment, be it a shop, a company or a farm, you have an advantage because it’s what you’re used to,” he says, sitting in Taxback’s beautifully-appointed headquarters on Dublin’s St Stephen’s Green.

Clune started his first business when he was just seven, collecting used fertiliser bags from farmers to sell 20 at a time for a pound to wood merchants. They would use them to sell logs at petrol stations.

“It was a great business. I was able to buy my first BMX bike out of the proceeds,” he says.

Characteristically, he declines to give an annual turnover for that first business. “I’m very quiet about those sort of things still but the business tragically went bust when I was eight. An older guy, a 10-year-old, came along with a better see-through bag that allowed people to see the wood,” he says.

“It was the best experience probably in my life. He put me out of business because I didn’t diversify my product quickly enough and my customers weren’t happy. But I was too busy celebrating with my BMX. You get lazy. But I learned a lot from that.”

As a 19-year-old college student the, by then, dreadlocked and Doc Martens-wearing Clune was back in business. This time it would prove life-changing.

During his summer holidays he went to Germany and found well-paid work in a medical-device factory. The owner asked Clune to come back the following summer and he told her he would bring friends. Back in Trinity College he advertised his new ‘Work in Germany Programme’. For IR£200 he would organise a job and accommodation in the factory and promised to look after the students’ needs for the summer – 110 students signed up and Clune pocketed IR£22,000 for his troubles.

“It was good revenue. But it was absolute torture work, dire. I was plagued with questions about everything from mattresses to where to get hash.”

He had also promised he could get the students’ German income tax back for them.

‘I’m very sorry,” said the woman behind the counter at the Cologne tax office after he arrived with a Guinness bag stuffed with Irish P45s, “but unfortunately most of your students have underpaid their taxes.” He headed for the lift to deliver the bad news to the waiting students outside. “The lift stopped and a really well-dressed six-foot-six guy with a very impressive moustache got in. He looks at my Docs and dreadlocks with a bit of disdain but then saw the Guinness bag and asked me did I come from Ireland. My life changed there and then.”

The man was director of the tax office and just back from a cycling holiday of Cork and Kerry.

“I absolutely love your country, why are you here and how can I help you?” he said to Clune. The students all got their tax back.

“If it had been a Heineken bag I would now be working for PwC,” he says, laughing.

Two decades on, his Vat refund business operates in 70 countries and he has added new companies where he has spotted gaps in markets such as international payments and payroll management. He now employs 1,200 staff and his client list across the Taxback group includes Apple, Google, Intel, Ryanair, Bank of America, Bloomberg and many other big businesses.

He is particularly excited about TransferMate, the group’s five-year-old international payments company. Set up originally as a way for Taxback itself to transfer its own funds internationally, TransferMate has shifted more than $10bn (€8.9bn), says Clune. Many universities in Ireland, the US and Australia use the service for fee-paying, and major companies such as Ryanair are clients.

But Clune says TransferMate is on the cusp of something even bigger in the banking sector. The service can transfer money across borders much faster and cheaper than what traditional banks currently offer. But rather than take on banks head-to-head, Clune is looking to partner with them and offer them a slice of the action.

“There’s two schools of thought in fintech – one is to be a total disrupter, the other is to partner. We’re in early-stage partnership talks with banks around the world, including one significant domestic Irish bank, several in the UK and three top 20 US banks.”

The company has invested €20m in securing global licences around the world and in every US state, as well as in technology for the system. Instead of using an international bank transfer, clients pay into a local TransferMate bank account and the intended recipient is instantly paid from a TransferMate bank account in their own country, meaning there is no expensive and lengthy interbank transfer required.

Banks charge fees on money they send internationally, but not on money they receive. So TransferMate is offering to share its own fee with its partner banks, creating a new revenue stream for the bank, while still keeping it cheaper for customers.

“It takes a long time to get these licences but now we have them and we’re in discussions with various banks. The big banks know their IT infrastructure is very archaic and the smart big banks know they need fintech partners. Either they compete head-to-head or they collaborate. The smart banks will partner with us.

“It could be a really big business. We’ve done all the hard work in terms of building the infrastructure. Now it’s a matter of scaling it.”

Such ambitious growth requires funding. But Clune says Taxback’s various subsidiary companies throw off enough cash to finance the opportunities and that he has not even considered flotation on the stock market. “I don’t really get why people sell their business so quickly. I don’t understand the rush. I’m happy doing what I’m doing,” he says.

“We have significant opportunities and my plan is to continue growing the business as big as we can get it. We’ve a huge amount more in the tank and there’s no pressure to make any exit decision or to sell. I’m happy. I can do what I want and what I want is to grow the business.”

He declines to put a number on how big the company is or how big he believes it can get. “I don’t actually do revenue targets. It’s more a case of: ‘Just keep going lads’. I’m fortunate that all the businesses in this group have been bootstrapped and funded internally by the original business and others have become profitable so we’ve been able to scale that way.” But Taxback’s organic growth model may no longer satisfy the breadth of Clune’s ambition. The group’s international payroll company Immedis handles pay for globally-diversified companies such as Airbus and ESB International. Last month it made Taxback’s first serious acquisition, US payroll firm Expaticore for $10m. Further US acquisitions will likely follow later this year with a number “in the €25m type bracket” under consideration, he says.

“Over recent years, we’ve done several deals whereby we didn’t directly buy the company for a headline price but bought their business through a revenue share over a three- to four-year period. It’s less risky that way. But now there’s opportunities that definitely make sense for us.”

It hasn’t all been plain sailing for Clune in recent times. He has found himself embroiled in a very public row with state foreign-direct investment agency IDA over Connect Ireland, the jobs initiative he set up and funded. He promoted the idea – which he describes as a “a patriotic, philanthropic initiative” – in order to attract investment into Ireland. So-called “connectors” are paid up to €3,000 per job created that is ultimately funded by the IDA. The two organisations are at loggerheads over just how many jobs Connect Ireland has created and the initiative is now the subject of a ministerial review.

But what is not in dispute, says Clune, is that Connect Ireland has brought 95 new companies to the country compared to the 340 that IDA brought in the same period but at less than half the price per job. “The IDA naturally has a colossal budget. But we brought in a quarter of what they brought in from a standing start.”

For Clune, it’s all about turning problems into opportunities – like feeding beer to cows.

Founder and CEO of The Taxback Group