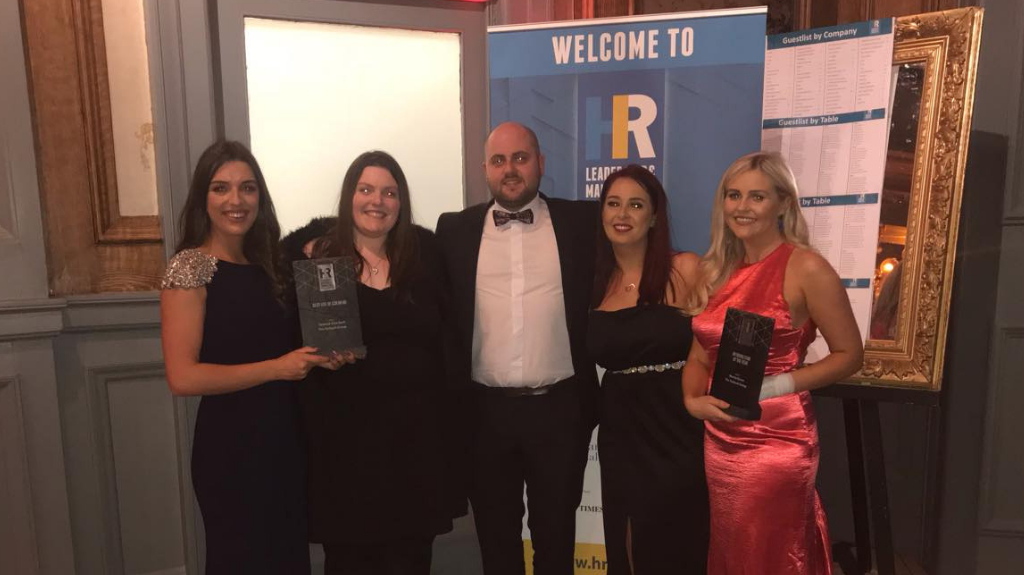 It was a successful night for Taxback Group at the HR Leadership & Management Awards 2019!

Launched in 2015, the HR Leadership & Management Awards is the long-standing platform for recognising and celebrating excellence in HR. Taxback Group were shortlisted for four awards in total and were thrilled to come out on top for two of them!

Marcie originally joined The Taxback Group as a HR Officer on a Maternity Leave contract in 2016. The skills and talent that Marcie developed in this short period of time resulted in the HR Director and Senior Management offering her a permanent role in the company, and she was promoted to HR Generalist in October 2017. Less than one year later in 2018, Marcie was promoted to HR Business Partner.

This is a fantastic achievement for Marcie given that she has only been with the company for less than three years. One of Marcie’s initial goals when she joined the Taxback Group was to combat issues of trust, communication and engagement to create a workplace that all staff could feel involved in, empowered by and proud of.

There are many initiatives and processes Marcie implemented or improved to achieve success, such as our Corporate Social Responsibility Program, our wellbeing program, and an engagement strategy which has resulted in The Taxback Group being recognised as a Great Place To Work 4 year in a row, with substantial evidence of improvements in workplace culture, as a direct result of Marcie’s initiatives. We’re lucky to have such a dedicated, talented and hard-working person on our team, and we’re thrilled that she has received this award. Not to mention that earlier this year, Marcie was also awarded with both the CIPD and Legal-Island Rising Star in HR Awards, making it a well-deserved 3/3! Best Use of CSR in HR – Taxback Give Back

We won the Best Use of CSR in HR category for our ongoing CSR initiatives branded under Taxback Give Back. Our CSR Program was initially established in 2007 in response to a tragic flooding disaster in Tsar Kaloyan, Bulgaria which killed eight people and left dozens homeless without food or water. Our employees at the time were deeply saddened by the news and rallied together to help. Within 48 hours, they had organised 3.5 tonnes of food and 12,000 litres of drinking water for the village. After this event, we decided to formalise our CSR activity and give it a global reach so staff in our offices all over the world could get involved.

Corporate Social Responsibility is a vital part of our remit. It has always been important for The Taxback Group to give a local feel to global initiatives which is why we have offices located in so many countries all over the world.

In each of the communities in which our offices are based, we strive to make a difference and we have a global team of CSR champions who work on fundraising and team-building activities to help local charities. Receiving this award is testament to the hard work that all of our CSR Champions do on a daily basis, and we’re absolutely thrilled. Overall, it was a fantastic night in the Round Room at the Mansion House, and we’d like to say thank you and well done to the HR Leadership & Management Awards for putting together such a great event. Congratulations to all of the nominees and winners, it really was inspiring to see the calibre of initiatives and projects from some of Ireland’s most successful businesses. We certainly didn’t envy the judges as last night showed how difficult their task truly was!